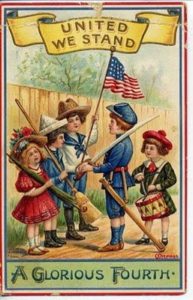 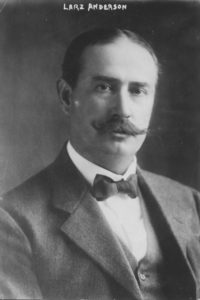 Larz Anderson in 1911. Press photo taken at the time of his
first diplomatic assignment under President Taft.

From early November 1911 until the early fall of 1912, Larz Anderson served as American minister plenipotentiary to the Kingdom of Belgium. He and his wife Isabel, who was the official hostess of the legation, enjoyed inviting Americans living in Belgium to their temporary home, the Palais d’Assche (which has a Marjorie Merriweather Post connection), and entertaining their compatriots in an American rather than European fashion.

By the Fourth of July, however, Isabel had already returned to the U.S. to spend the summer with her mother and Larz was left to his own devices to plan a fitting celebration for America’s Independence Day. He relished this opportunity to do things “his way.”  For example, in a letter to Isabel written as the event was about to start, he noted that he had decided to start the party earlier in the day than Isabel would have preferred:

…It is the Glorious Fourth and we have begun it hours sooner than with you. The flag is hanging out over the porte cochère: the florist is at work setting plants out in the lobby and on the great staircase hydrangeas that make a beautiful showing; but the Chancery is closed in honor of the day. (I shall have the great heavy shutters that make the place look like a fortress rolled open, however, for they give such an air of inhospitality when they are closed, and I want to “look” my welcome today). My dinner tonight will be of some twenty-two and I shall set a little table in the gallery to take the overflow.

People started arriving at the Legation at 3:00 o’clock in the afternoon. The Legation’s chauffeurs, porters, and footmen dressed in livery.  The Belgian footman Edouard offered a little American flag pin to each guest, presenting it on a silver tray “in his grandest manner, with nice little bows and smiles,” Larz wrote.

The Legation’s cook prepared a buffet that included an “especially American” chicken salad, champagne punch, ice cream, and lemonade. Some of the guests were appreciative that Larz served lemonade, not orangeade, the preferred soft drink of Belgians at the beginning of the 20th century. Lemonade reminded the Americans of home.  The centerpiece of the buffet was created by the Legation’s pastry chef:

The chef made a “cake” with his idea of “Liberty Enlightening the World” on top of it – a doll with a brown satin dress (to represent bronze) holding up an electric bulb – and it was funny enough to keep.

In the evening, Larz hosted a men-only black-tie dinner, with toasts to President Taft and King Albert.  The guest list of 22 men included:

After dinner the American staff surprised the party by setting off fireworks in the garden, an event that required official permission from the Belgian police. Larz’s trusted long-term chauffeur, Bernie Foy, had made those arrangements himself.  An orchestra hired for the evening played the national anthem during the fireworks. 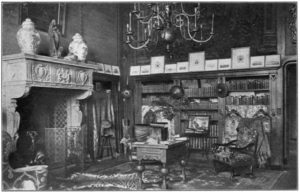 The fumoir of the Palais d’Assche, as it appeared when the Andersons lived there (1911-1912)

The men then retired to the fumoir (smoking room) for cigars and drinks. Larz must have felt very pleased indeed on the success of the evening. 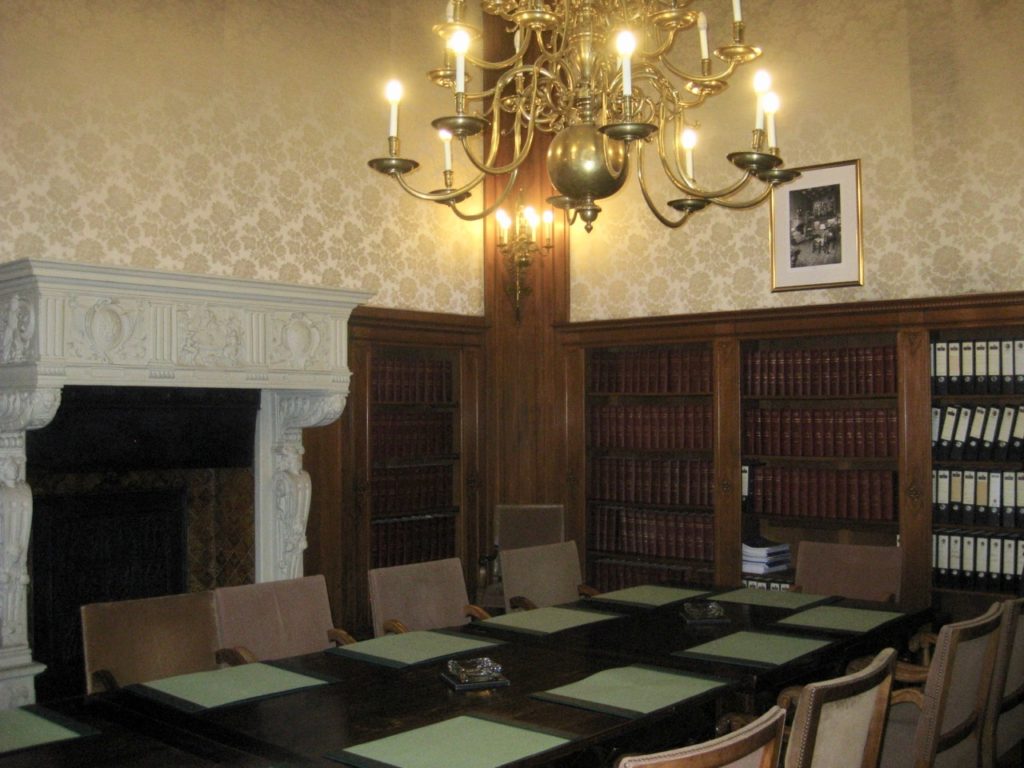 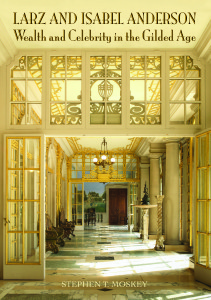 For more information about the Andersons’ life in the Palais d’Assche, please read Larz and Isabel Anderson: Wealth and Celebrity in the Gilded Age by Stephen T. Moskey.  Available on Amazon Prime.