On Friday afternoon, April 10, 1891, from 4 to 7 o’clock in the afternoon, Mr. and Mrs. Albert Clifford Barney hosted a tea at their new home at 1626 Rhode Island Avenue, in the fashionable Dupont Circle neighborhood of Washington, D.C.  The Washington Post reported every detail of the event, especially the flowers — the de rigueur decoration at any Gilded Age Washington social event:

“The picturesque hall and stairway were decorated with a profusion of palms and azalias [sic], while in the picture gallery and parlors were ornamental vases of long-stemmed roses and cut flowers.”

Though in his day Mr. Barney was well-known as a very successful mid-west businessman, he is probably best known now as the husband of Mrs. Barney — Alice Pike Barney (1857-1931).  Alice was an accomplished painter, a generous patron of the arts, and a high-profile non-conformist.  In 1911, she led the creation of The Playhouse in Washington, DC, a private theater company that was intended to rival the New Theater in New York, or the Comédie Française in Paris.  Late in life she scandalized polite society in Washington and New York when she married a young State Department official 36 years her junior.

But back to the Barney’s home on Rhode Island Avenue, in Washington’s Dupont Circle neighborhood:  It is surprising that, despite the magnificence of the house and the fame of its owners, nothing has ever been written about the A.C. Barney House.  There are two possible reasons for this.  First, until now, there were no published photographs of the house or its interiors, though the photographs have been readily available, “hidden in plain sight” in Alice’s papers housed at the Smithsonian Institution.  Second, the place of the A.C. Barney house has been overshadowed by Alice’s second Washington home, Studio House, designed for Alice in 1902 by the Washington architect Waddy B. Wood.  Alice led a very modern and bohemian life at Studio House that attracted attention to not only its mistress, but the house itself.  Larz Anderson once called the house “queer.”

In 2014, while writing my book, Larz and Isabel Anderson: Wealth and Celebrity in the Gilded Age, I worked with the Alice Pike Barney Papers in the Smithsonian Institution Archives.  The Andersons had rented the Rhode Island Avenue home from Alice for Washington’s 1902 winter social season, and I wanted to know more about the house.  In doing that research, I came across a set of extraordinary photographs of the interiors of the Rhode Island Avenue house.

This collection of photographs is made all the more extraordinary by the fact that it actually consists of two series of photographs, one taken earlier (perhaps around 1891 when the house first opened), and the other later (perhaps around 1900, when Alice started renting the house furnished during Washington’s winter social season).   The two series are easy to distinguish from one another.  The earlier photographs are in sepia, and show the house with less furniture and fewer decorative elements and pieces of art.  The later photographs are in greyscale, and show the house with much filled-in interiors.  We often feel lucky having one set of interior photographs of an artistic house of the Gilded Age.  In this case, we have two sets that document the evolution of the interiors during the decade that the Barneys occupied the house.

What follows is a series of paired photographs, ca. 1891 and ca. 1900, that document the evolution of the home’s interiors over time, approximately ten years apart.  Click on the small photograph to bring up a larger version of that will allow you to study the details of each room.  The ca. 1891 photographer is Geo. Price; the photographer of the ca. 1900 series is unknown.  (All photographs are from the Alice Pike Barney Papers, Smithsonian Institution Archives, Washington, D.C.  I am making my scans of the originals available under a Creative Commons license, CC by NC-3.0.) 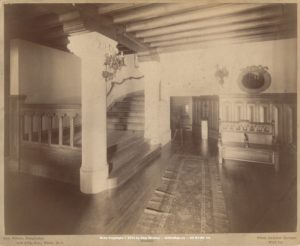 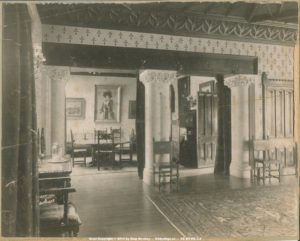 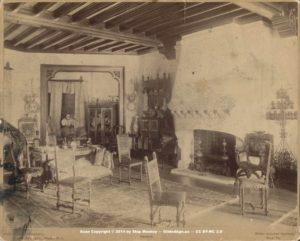 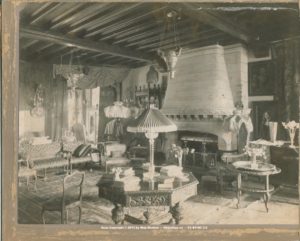 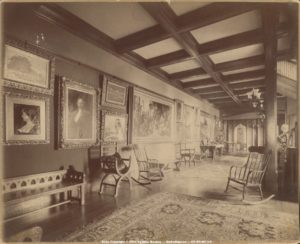 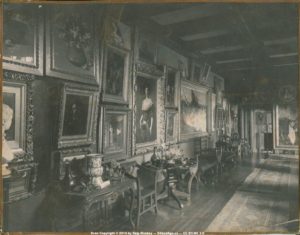 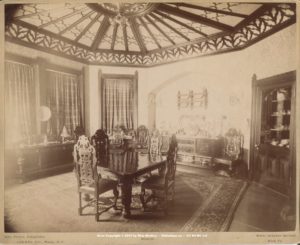 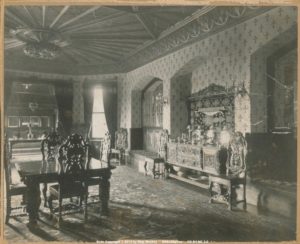 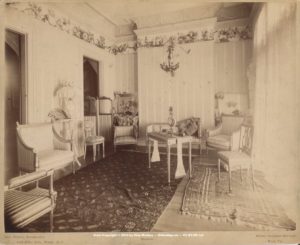 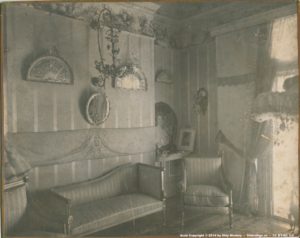 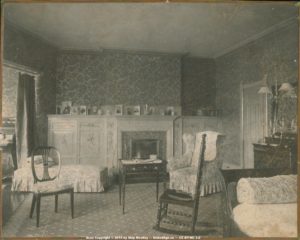 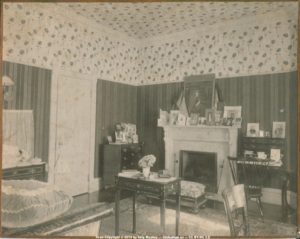