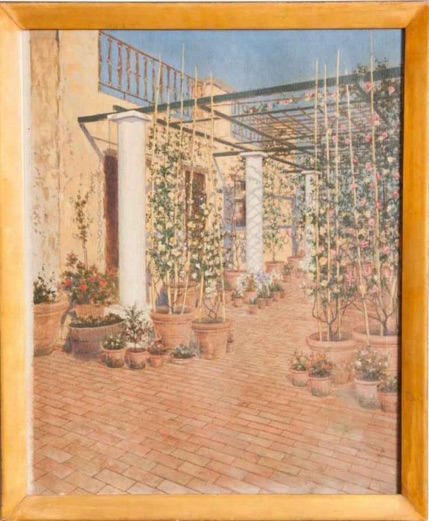 On January 31st, 1896, Larz Anderson, then serving as first secretary of the American Embassy in Rome, wrote to his mother that he had dined the night before at the home of Maud and John Elliott.  There were two other Americans at the dinner, a Mrs. Horowitz of Baltimore and a Miss Perkins of Boston. “A most pleasant evening,” Larz reported.

The Elliotts lived on the entire top floor of the Palazzo Rusticucci.  Built in 1584 and first occupied by Cardinal Girolamo Rusticucci, the palazzo was within sight of St. Peter’s Basilica. (After years of neglect and decay, the palazzo was torn down and rebuilt as a replica of the original in 1940.) 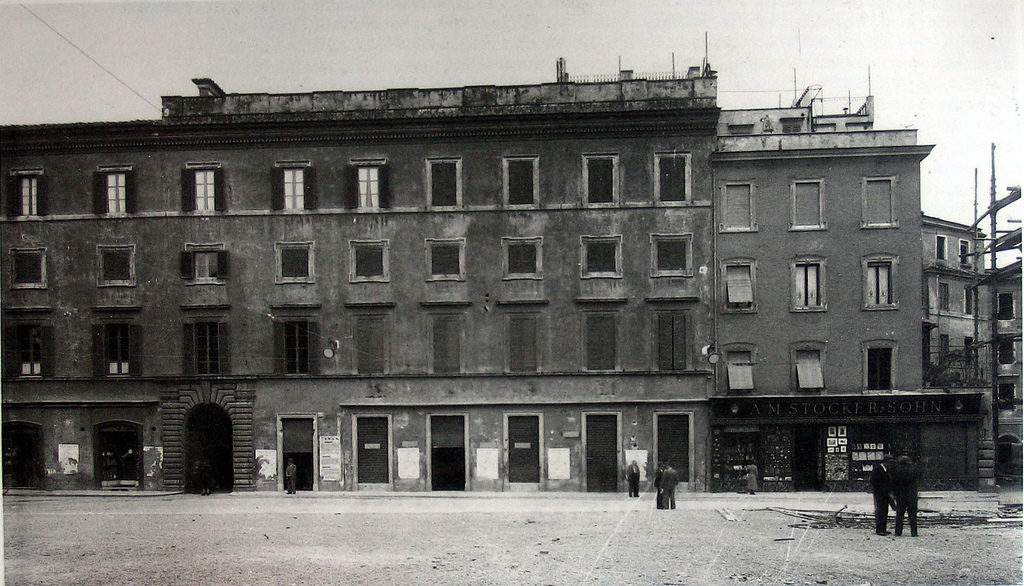 The Palazzo Rusticucci, Via della Conciliazione, Rome (photographed in 1936), above; its proximity to St. Peter’s Church, and as it appears today, below. 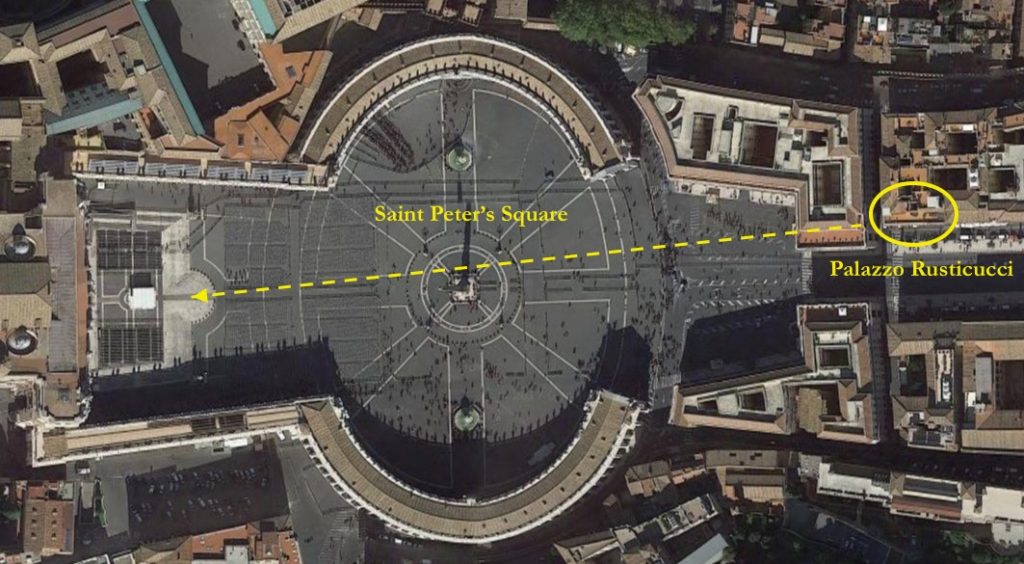 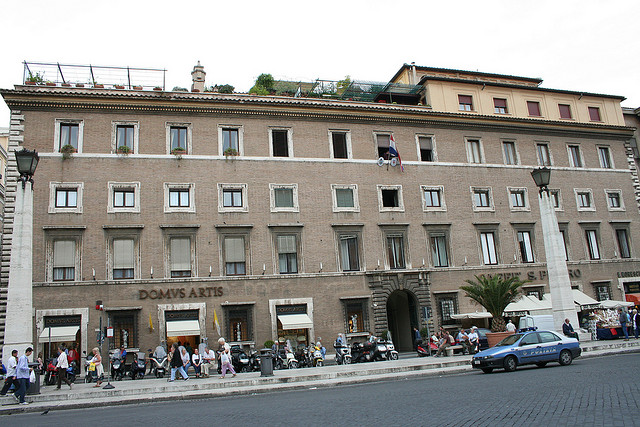 Maud Howe Elliott, the daughter of Julia Ward Howe, later recalled that she and her husband had introduced the two young people to each other that evening on the palazzo’s rooftop terrace.  Though we have no textual account of Larz and Isabel’s first meeting,  there is a visual record.  When Isabel published her 1922 roman-à-clef Polly the Pagan about the European adventures of an American heiress in the 1890s, she had endpapers designed that captured the moment of their first meeting that January in Rome. 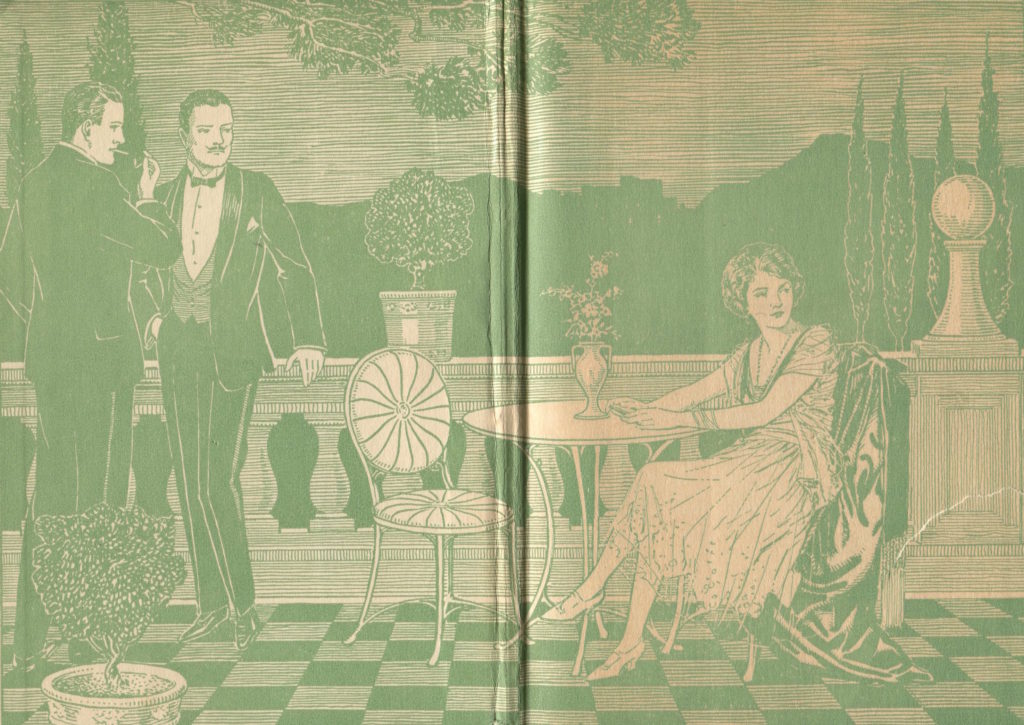 “The first meeting.”  John Elliot, lighting a cigarette; Larz, gazing upon Isabel; Isabel, pretending not to notice.
(Endpapers, Polly the Pagan by Isabel Anderson, 1922)
Note:  Although the original event took place in 1896, Larz, John, and Isabel are presented in this print in 1920s attire.

In Maud’s memoir about her life in Rome, Roma Beata: Letters from the Eternal City (1909), she described the terrace in great detail:

The terrace, or house-top, is a flat roof; it covers the whole length and breadth of the apartment, and belongs exclusively to it.  A parapet three feet high runs around it; at one end is a small room with a second smaller terrace on its roof, reached by a flight of stone steps; at the other end is a high wall with a little open belfry on top.  The view is sublime; you look down into the Square of St. Peter’s with the Egyptian obelisk in the middle, Bernini’s great colonnades on either side, the Church of St. Peter’s at the end… (p. 8)

Maud clearly loved the terrace, and once called it the “crown and glory of our home.” 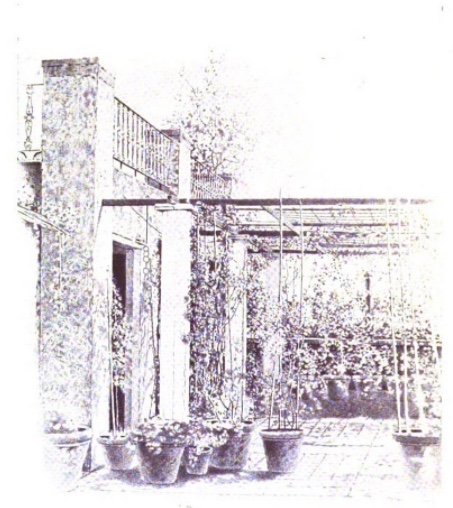 The terrace had an important place in the history of the Anglo-American artistic and literary community in Rome.  Maud’s husband John was an important late-19th and early 20th century Scottish-American artist.  Their circle of friends in Rome included many of the creative luminaries of their era.  It was on the terrace of the Palazzo Rusticucci, for example, that Maud and John introduced the Anglo-American writer Henry James to the the American-Norwegian sculptor Hendrik Christian Andersen. James fell under Hendrik’s spell, and remained enchanted by him for the rest of his life.

Larz Anderson later asked John Elliott to paint a picture of the terrace for him as a souvenir of, as Maud wrote, the “happy hours” they had spent there. “This picture now hangs at their [Brookline] country home,” she noted in her 1930 biography of her husband, who had died in 1925.

But there the mystery of the painting’s history begins.  When Isabel Anderson died in 1948, the painting did not appear in the voluminous and carefully documented inventory of the Anderson mansion in Brookline, nor did it appear in any of the extensive photographs of the interior of the mansion taken in 1949 before the Town of Brookline took possession of the estate.  I knew of the existence of the painting from the research I had done for my biography of the couple, Larz and Isabel Anderson: Wealth and Celebrity in the Gilded Age, but I was unable to locate the work or any images of it.  I came to the conclusion that either Isabel had given it away before her death to one of her servants, as she did with other of her valuables; or, it had been stolen from the mansion after Isabel’s death before the contents were sold by her executors. (Rumors about this still circulate in Brookline.) Either way, I was sure I would never see the painting that meant so much to Larz and Isabel – and to me as their biographer.

As my book was going to press (I was probably already reading second proofs), I made one last attempt to locate the painting.  I had mentioned the painting in a footnote, but noted only that its whereabouts was unknown.  I began Googling terms that might describe the painting as I imagined it to be: Terrace – Rome – Painting – John Elliott – Palazzo.  I knew from Maud’s many written descriptions of the terrace that there were potted flowering plants.  I Googled – terrace – flowers – potted flowers – Rome – garden.  Within minutes, this webpage popped up.  There, I saw that the October 2012 Skinner (Boston) auction of European furniture and decorative arts included an item described as: “Lot 639B Anglo/American School, 19th Century A Terrace Garden, Possibly Rome,” whose catalog entry included this notation:

I had found the painting. 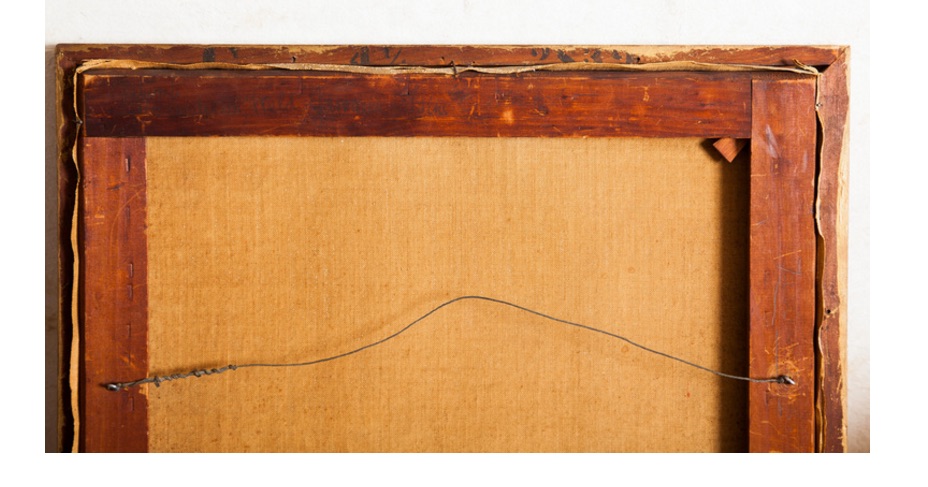 From the Skinner sale I was able to trace the painting to a subsequent online auction hosted by 1stdibs.com but without a record of its sale price. This time, however, the painting was correctly attributed to John Elliott.

1stdibs.com did not return my email or call requesting that they forward a message from me to whomever had bought the painting.  I put all that I knew about the whereabouts of the painting into footnote 3 of chapter 4, and left it at that.

In 2016, one of those happy coincidences that every author dreams about happened.  My book was published in April that year, coinciding with the Society of the Cincinnati’s year of programs and events celebrating the life and accomplishments of Isabel Anderson.  My Anderson House lecture on Larz and Isabel was scheduled as the concluding event to an exhibition called “The Adventurous Life of Isabel Anderson” (March 24–September 18, 2016).

I had no idea what awaited me when I went to visit the exhibition shortly after it opened.  There, in the room of Anderson House that had once been Larz’s billiards room, I came face-to-face with the object that I had long admired and wished to see: Garden Terrace, Rome (as it has been named by its current owners in New York City).

I was a very happy biographer that day! 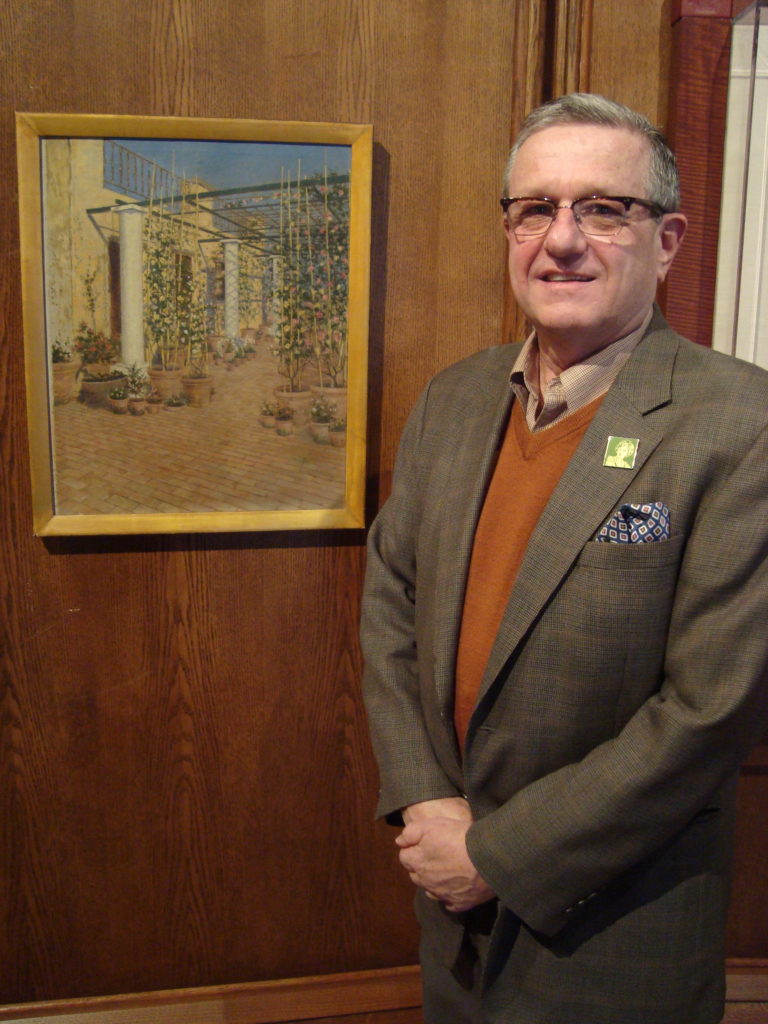 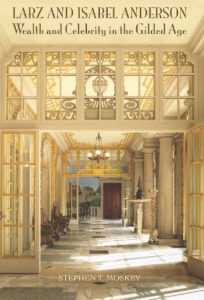