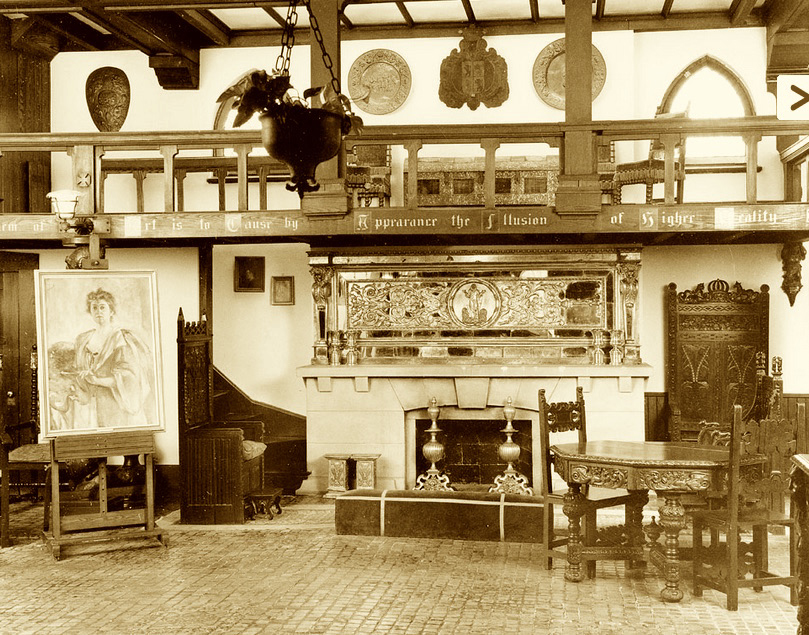 Alice Pike Barney (1857-1931) was a wealthy Washington socialite who was not just a patron of the arts, but also an accomplished artist herself.  She did not fit, nor did she want to fit, any stereotype.  She once described life in Washington as “small talk and lots to eat, an infinite series of teas and dinner.”  When she entertained, she did so her way.

In the winter of 1909, Larz and Isabel went to a late evening theatrical performance at Alice’s home, Studio House, at 2306 Massachusetts Avenue, two blocks from Anderson House. Designed by Waddy B. Wood in what has been called a “whimsical Spanish” style, the 1902 house is on the National Register of Historic Places. Larz, who had a vast knowledge of architecture and decorative arts, considered the house “queer” and “weird.”  He wrote:

The house is queer, with low ceilings. It is called Spanish, and had dim lights hung about. We groped around, unable to recognize anyone, and watched people running into mirrors. Musty tapestries hung on the walls. The house I am sure is never dusted and smells as if it were never aired. Incense curled about you, and half-dressed ladies looked down at you from the walls, and weird, indistinct sketches of wild-eyed people peered at you. The tableaux were well done by pretty society girls. They were called song tableaux, and were very artistic and well worth seeing.

Alice Pike Barney is one of the many Gilded Age celebrities who make appearances in the pages of the first-ever full-length biography of one of that era’s most fabulous couples – Larz and Isabel Anderson: Wealth and Celebrity in the Gilded Age by Stephen T. Moskey.