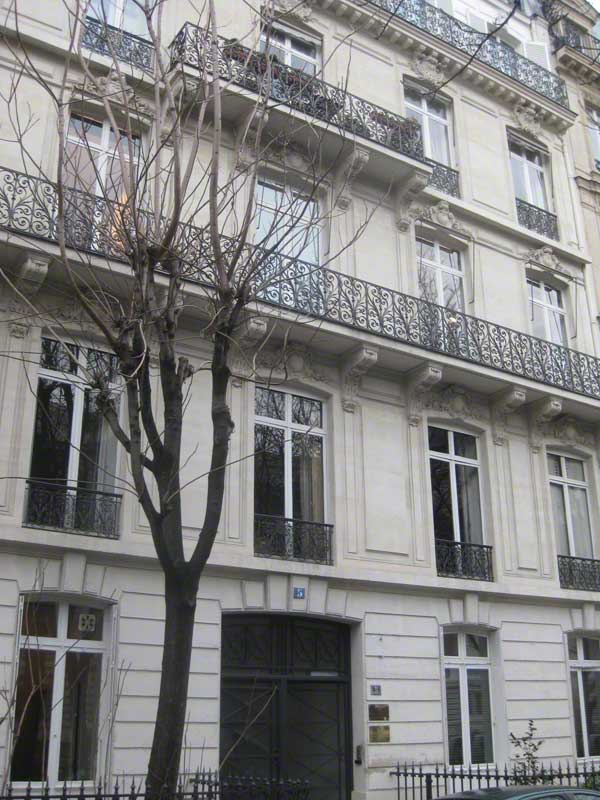 In 1877, when Larz Anderson was 11 years old, his parents moved the family from Cincinnati to Paris, where they lived in an apartment at No. 5 rue d’Antin, a block from the Seine river. The beautiful limestone town house (hôtel particulier in French) is still standing, though the address is now No. 5 avenue Franklin D. Roosevelt. The 1870s were years of rapid growth and transformation of the city after the fall of the Paris Commune in 1871.  It was an exciting time for an inquisitive boy like Larz to take walks in the city, and his lifelong interest in neoclassical Beaux-Arts architecture and gardens may have been in part inspired by what he saw on those walks.

In Paris, Larz studied with a private tutor.  He also found many ways to enjoy the city. He walked to the little pond in the Tuileries Garden to sail his toy boat. Years later he wrote in his journal that during that year in Paris, he “returned to the Champs Élysées again and again to view Punch and Judy at their eternal quarrel.” Les Guignols, as they are known in French, are a traditional form of street entertainment in France and elsewhere.  The 1963 movie Charade starting Audrey Hepburn and Cary Grant includes a famous scene shot in the same Jardin des Champs-Élysées where Larz attended Punch and Judy shows in the 1870s.

(The YouTube clip is misidentified as Luxembourg Garden in its title. The scene was indeed shot in the Champs-Élysées Garden.)