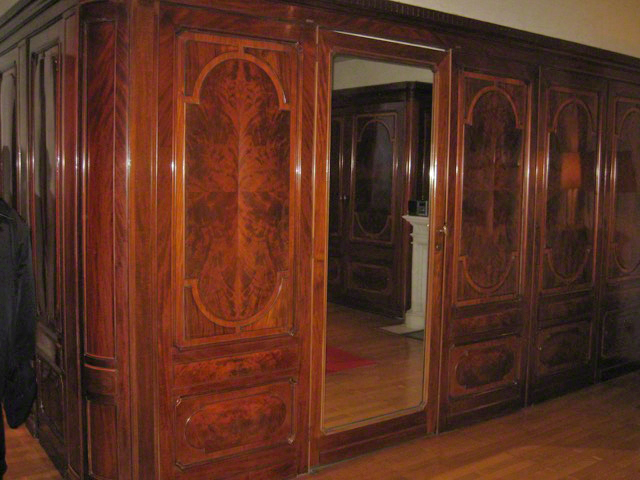 In the fall of 1911, President William Howard Taft named Larz Anderson to be American Minister Plenipotentiary to the Kingdom of Belgium.  Larz arranged to lease the Palais d’Assche, in the heart of old Brussels, as his legation and residence.  Though the large and elegant hôtel particulier was exactly what he had hoped for, it was in much need of renovation and re-decoration before they could occupy it.

One of Larz’s renovation projects was a boudoir for Isabel that has survived intact for 104 years. Created out of what had been a small sitting room on the main (second) floor of the building, the architect in charge of the renovation lined the new boudoir with massive, built-in armoires of rich mahogany.  There was plenty of room to hang dresses and gowns and store blouses and lingerie. He included a full bathroom in the layout, built into an inside corner of the room, that he disguised as more armoires.  The bathroom door was inset with a full-length mirror to make it easy to find.

The boudoir is now the office of a judge who serves on the bench of the Belgian Council of State, a branch of that country’s Supreme Court.  When I visited the Palais in January 2014 and spoke with him, he told me he was pleased to finally understand, after so many years of pondering its furnishing and arrangement, why his office was the oddest room in the building! 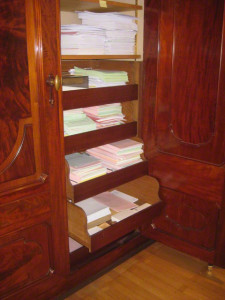